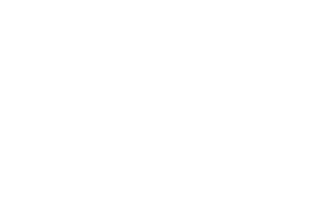 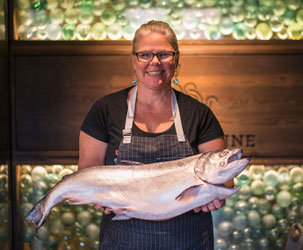 Cooking started at a young age out of necessity for Jasinski.  Growing up in a single-parent household with two siblings who all took turns cooking, Jasinski developed a knack for following recipes and creating her own, until eventually, it was always her turn to cook.  In a high school occupational program for aspiring chefs, Jasinski made the decision to leave her other passion – music – behind, and dedicate her studies to cooking, permanently trading the melodic sounds of her clarinet, oboe and flute for the cacophony of clanging pots and pans.  At the time, the best cooking school in the state of California was right in her own backyard, Santa Barbara City College, where she not only refined her cooking skills, but got a taste of restaurant management and front-of-the-house experience.

Ever the over-achiever, Jasinski then took her training to the next level at the Culinary Institute of America, making the dean’s list and unsettling more than a few teachers by challenging their principals or techniques.  “I believe you get out of things what you put into them,” she explains.  “I always want to get the most out of everything I do.” And she does. Working her way through school waiting tables on campus during the week and apprenticing in the famed Rainbow Room kitchen in New York City on weekends, Jasinski completed her formal education before she was 21-years-old.

After graduation, Jasinski worked at the Rainbow Room under renowned restaurateur Joe Baum and Chef André Rene, which gave her the real foundation of her training.  The turning point in her career came from a chance meeting with a guest at the restaurant – Wolfgang Puck.  In polite, casual conversation, he mentioned she should “look him up” when she was in Los Angeles.  So she did.

Weary of the crazy, fast paced lifestyle in New York City, Jasinski was drawn back to sunny Southern California with a bold strategy: to apply for a job at the top ten restaurants in Los Angeles, one of which was Puck’s Spago.  She landed a job at the prestigious Hotel Bel Air, where she had the opportunity to re-acquaint herself with Puck, a consultant at the time for the hotel’s restaurant.

When their paths crossed this time, Puck took more than a passing interest, referring her to Jody Denton, of Mansion on Turtle Creek fame, who was in the process of training a kitchen team for a new restaurant opening.  Jasinski started as lead line cook at Eureka, a Los Angeles brewery restaurant, and within one year was promoted to sous chef.  From there, Jasinski’s fate was inexorably linked to Puck’s.

Their creative and fruitful 10-year relationship took Jasinski around the country, with her helping to develop and open restaurants, create menus, train and manage staff, and, of course, wear her chef’s hat for restaurant concepts ranging from fine dining to café cuisine.  Her impressive restaurant credits include sous chef at Postrio, San Francisco; café chef at Spago, Las Vegas; executive sous chef at Granita, Malibu; executive sous chef at Spago, Chicago; and corporate chef at Wolfgang Puck Food Company.  With Puck’s support and encouragement, she even did a stint in Paris at Ledoyan, a Michelin two-star restaurant.

“Wolfgang was my mentor and my culinary role model,” Jasinski says.  “His philosophy that it’s not necessarily what you do, but how you do it, is my mantra…You can make mashed potatoes, or you can make great potato puree.”

In 2000, Jasinski decided to simplify her life and settle down in Denver, one of the stops she fell in love with on the Wolfgang Puck tour.  She became Executive Chef at Panzano, where profiles and reviews in local and national publications put Jasinski at the head of her class.  Not only was she wildly successful, but she had the opportunity to work with future business partner Beth Gruitch.

In 2003, Jasinski and Gruitch decided to leave their posts to begin their first venture into restaurant ownership.  The following year they opened Rioja, a restaurant in Denver’s Larimer Square with a contemporary design and Mediterranean menu influenced by local and seasonal Rocky Mountain ingredients.  Having designed over 10 kitchen models during her tenure with Puck, Jasinski had no qualms about doing the same for her own.

2013 was a very good year for Chef Jen. She became the first Denver chef to win The James Beard Foundation Best Chef Southwest award in a ceremony in New York City on May 6th. She was a finalist on Bravo’s Top Chef Masters Season 5 with other notable chefs Brian Voltaggio, David Burke, Douglas Keane and Sang Yoon and won the Princess of Porc title at the Denver tour stop of Cochon 555 in 2014. In 2016 she was named a semi-finalist for the James Beard Foundation Outstanding Chef award. 2020 brought another semi-finalist nod from the Beard Foundation as Crafted Concepts joined some of the nation’s best operators in the Outstanding Restaurateur category. She was also named one of Nation’s Restaurant News’ 50 Most Influential Women in Foodservice in 2020.

Rioja, Bistro Vendôme, Ultreia and Stoic & Genuine are consistently listed among the top restaurants in Denver by 5280 Magazine, the Rocky Mountain News, Zagat and the Gabby Gourmet Restaurant Guide and Rioja has been annually awarded four stars by AAA since 2008.  Jasinski has been named Chef of the Year, Best New Chef, Rising Star and more in Denver Magazine, Restaurant Hospitality, Nation’s Restaurant News, The Denver Post, eater.com and 5280 Magazine.  In 2007, she was the Jean Yancey award winner in the National Association of Women Business Owners Outstanding Women in Business awards presented by the Denver Business Journal. Jasinski was named 2004 Colorado Chef of the Year and 2005 Western Regional Chef of the Year by the American Culinary Federation, and also appeared on The Food Network’s “Thanksgiving Challenge” the same year. In 2021 she was inducted into the Menu Masters Hall of Fame whose previous winners include her mentor, Wolfgang Puck, Jacque Pepin, Jose Andres and others.

In April 2006, Jasinski and Gruitch made the decision to purchase Bistro Vendôme, a classic French bistro located across the street from Rioja.  The pair opened Euclid Hall Bar and Kitchen on 8/9/10 at 11:12:13 a.m., their third restaurant just around the corner from Rioja.  Euclid Hall was one of 5280 magazine’s top 10 new restaurants in 2010. 2011 brought the release of Jasinski’s new cookbook, The Perfect Bite, 76 recipes from the Rioja kitchen. Stoic & Genuine, their fish house in Denver’s historic Union Station, opened in July of 2014. Ultreia opened in Denver Union Station in December 2017 showcasing food from the Iberian Peninsula countries of Spain and Portugal.

A tireless worker, Jasinski appears as a guest chef at numerous fundraisers throughout the country.  In her spare time she enjoys traveling, mountain biking and skiing with her family and friends.

FOR MORE INFORMATION, OR TO SCHEDULE A MEDIA INTERVIEW,